The July 4, 1976 dedication of the Broadwater County Museum and Historical Library culimnated seven years of planning and promotion by probably more county citizens than any previous event.

October 7, 1969 the Canton Women’s club called a meeting to stimulate interest in a Historical Society. The first official meeting of the Broadwater County Historical Society was August 21, 1970 and Lloyd Heberle was elected President. There was one silver dollar in the treasury left over from a previous historical society.

The priority project was to buy or build a museum. The need for a museum became urgent because artifacts were disappearing to the dump or to dealers. The project was motivated by the farm Bureau and other community organizations. 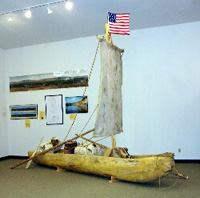 At the first annual meeting of the Historical Society on April 30, 1971 the treasury had $814 and there were 329 members.

The Board of Directors considered such alternatives as moving into the old Canton Church and buying the ranch home from the Cook Estate. In 1973 the County Commissioners offered for lease the lots on which the museum now stands. The membership had increased to over 500. The building fund was also increased from revenue sharing, a county mill levy, estates, memorials, life and annual memerships, private companies, school children, the Bicentennial Commission, and local merchants and service organizations.

Inflation was increasing, but the project appeared to be supported by most of the county. A bid was received from a local contractor which appeared to provide the building desired with the budget available. Construction began in April 1974 and one year later the annual meeting was held in the completed building. An Exhibit Hall Committee was named and worked under the direction of Rose Flynn designing and building the displays of artifacts collected for the grand opening. The museum is open to the public throughout the summer, closed only on the Fourth of July.

Work continues on registering, indexing, abstracting, repairing, displaying and filing acquisitions. In 1977, publication of a county history book, the Broadwater Bygones was completed; marking of all historical sites in the county is underway; and a 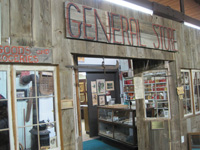 rock veneer was added to the museum. A framed addition was built in the fall of 1986. It has a display hall, a workroom, storage/shop room and second floor storage.

In 2000 work was completed on the newest addition. It measures 60’x80′, and contains a half-scale model of a dugout canoe of the type Lewis & Clark and the Corps of Discovery built on their voyage along the upper Missouri. Also featured in this addition are an authentic sheep herders wagon, a horse drawn carriage and a buffalo skin.

We deeply appreciate the enthusiastic support we have received throughout the years for historical projects.