In recent years, the Radersburg community has converted the historic Schoolhouse to a Community Center. One of the rooms servers as a meeting room for the local residents (and a restaurant during the Radersburg Days celebration) while the other is a small museum dedicated to the memory of the schoolhouse. 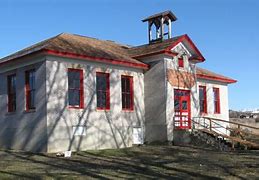